Live 8 403
Remixing in Live
Genre: Audio
Imagine being right next to a master remixer while he shows you how he creates his killer tracks! No need to imagine. You'll be right there in the producer's seat beside Olav Basoski as you watch this tutorial!

Olav Basoski
One of the most influential artists in the dance music industry, Olav Basoski has produced hundreds of records for his trend-setting Record Labels: Work Records, Rootz Records, and Samplitude Records.
Watch Free Previews!
View up to 5 free videos from ANY course each day.
Out of free previews? Come back tomorrow to watch some more!
Get A Library Pass!
Watch this course – and ALL Ask.Video courses – for as long as your pass is active.
Purchase just this course! Watch it anytime, for life.
To download & view offline, use our
NonLinear Educating Player Software.
Overview
Status: Available
Having remixed just about everyone, from Armin van Buuren to Moby, Olav Basoski is the virtual wikipedia of remixing: This guy knows it all!

Preparing a song for the dance floor is not an easy task. Trying to remix one of your own tunes is even harder. Luckily with Ableton Live in the able hands of Olav Basoski, DAW meets the master remixer creating the perfect remixing storm!

Experiencing the way that Olav Basoski guides you thru the process of remixing is a truly amazing trip. You're sitting by his side, absorbing every word as he explains how he approaches a remix... how he selects the perfect elements from the original song and builds brand new beats! You are right there as he constructs that perfect groove, and creates the new arrangement one step at a time.

In this one-of-a-kind tutorial you'll see how an audio master like Olav pushes himself ever harder to extract more impact from those micro musical moments where it really counts. You'll also see how he has an acute eye and ear for every nuance, every step along the way. Olav even shows you all his favorite third party plugins and, best of all, he explais why and how he likes to use them.

This Ableton Live tutorial is revolutionary because it's an exclusive, inside look into the way a true experienced pro does his everyday work. What really puts Remixing in Live over the top is the way that Olav gives you a front row seat as he shows you the inner workings ...the real arcana ... of why he does what he does throughout the whole song construction journey!

So sit down and learn the art of Remixing in Ableton Live with one of our top trainers: Olav Basoski!
Outline
Section 1: Section 1: Introduction
Section 2: Section 2: Pre-production
Section 3: Section 3: Beats
Section 4: Section 4: Processing
Section 5: Section 5: New Sounds
Section 6: Section 6: The Intro
Section 7: Section 7: The Break
Section 8: Section 8: The Outtro
Section 9: Section 9: The Remix!
Other courses in this series
What to do next
Embed Video
Embed this video in a blog, forum post, or webpage. 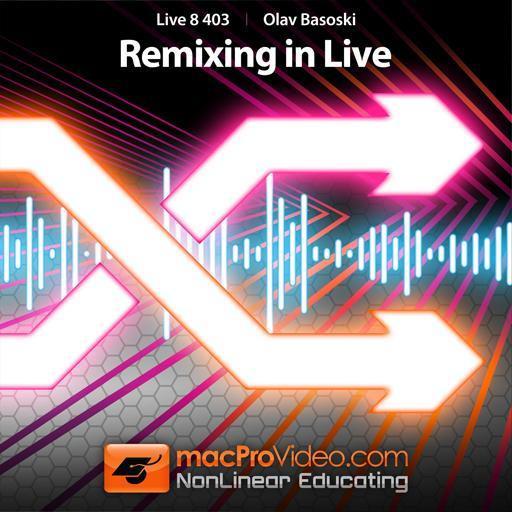